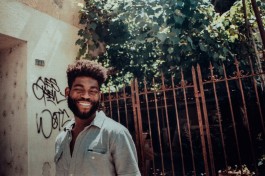 ... studied filmmaking at the Geneva Film School. Following a trip back to Cameroon in 2015, his original home, where he spent the first five years of his life, he starts to explore the notions of territory, identities, within its codes and associated representations. Arnaud Ele became known not only for his fashion photography, but also for his documentary series in Switzerland and Cameroon, as well as his many video collaborations with artists, singers and dancers from the art scene in Switzerland.